Menu
Board of Trustees // Nominating Committee

Article VI of the Learning Forward bylaws provide for two standing committees, one of which is the Nominating Committee. It is the duty of the Nominating Committee to conduct and supervise the process of the election of trustees and officers to the Board including the solicitation and research of suitable candidates, the preparation of the slate of trustees to be approved by the Board for election by the members, and the nomination of officers for approval by the Board.

The board establishes policies, guided by the bylaws, to ensure equity in representation of its members on the board of trustees. Accordingly, the nominating committee, appointed by the president, is comprised of representatives from the board of trustees and other leadership selected by the board. The committee makes certain that any person wishing to be considered has the opportunity to submit an application according to announcements made to the general membership. This nominating committee then develops and proposes a slate of candidates for board approval based upon qualifications that have been determined by the board.

The nominating committee is tasked with ensuring proper election procedures are followed to allow election of trustees by a vote of the entire membership in a manner permitted by Article IV of the organization’s bylaws and other applicable law.

The board determines qualifications for candidacy annually by reviewing qualifications required by the bylaws such as being a current member in good standing and meets the standard of having a simple majority of individuals employed in pre-K-16 education as members of the board at the time of official candidacy. Candidates are reviewed to be certain no one has served more than two terms and said terms were not successive in nature. The nominating committee reviews the board responsibilities, code of conduct and meeting norms with each potential candidate to ascertain if said applicant is willing and able to perform the duties for a minimum of three years with the potential of serving for an additional three year term if elected as an officer of the board.

Leadership is the capacity to translate vision into reality.

About the board of trustees

Becoming a board member

Get involved with Learning Forward 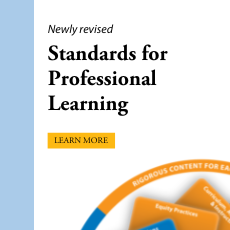