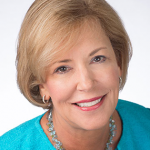 Stephanie Hirsh retired in June 2019 after 31 years with Learning Forward, an international association of more than 13,000 educators committed to increasing student achievement through effective professional learning. Hirsh led the organization as its executive director for the last 13 years where she presented, published, and consulted on Learning Forward’s behalf across North America. Her books include Becoming a Learning Team, co-authored with Tracy Crow (Learning Forward, 2018), Becoming a Learning System, co-authored with Kay Psencik and Frederick Brown (Learning Forward, 2018); A Playbook for Professional Learning: Putting the Standards Into Action, co-authored with Shirley Hord (Learning Forward, 2012); and The Learning Educator: A New Era for Professional Learning, co-authored with Joellen Killion (NSDC, 2007). Hirsh wrote a column for The Learning Professional, Learning Forward’s bimonthly magazine, Educational Leadership, Phi Delta Kappan, The Record, The School Administrator, American School Board Journal, The High School Magazine, and Education Week. Hirsh has served on a number of advisory boards including Learning First Alliance, 2-Rev, Digital Promise, the University of Texas College of Education, and The Teaching Channel. She served three terms as a school board trustee in the Richardson (TX) Independent School District. She received a Lifetime Achievement Award from the Texas Staff Development Council, Master Trustee from the Texas School Board Association, and was named a Distinguished Alumna by the University of North Texas.

How learning shaped my leadership

Knowing this will be my last opportunity to write this column as Learning Forward’s executive director, I want to share a few insights on habits I’ve found valuable as a leader. Not surprisingly,

There are many ways to build a career path

Remember the importance of maintaining a network of colleagues with connections. Ask five people how they got their current job, and I suspect networking played a key role in a majority of

At Learning Forward, we are embracing an emphasis on the implementation of high-quality instructional materials. As always, our work centers on building the capacity of all educators to ensure all 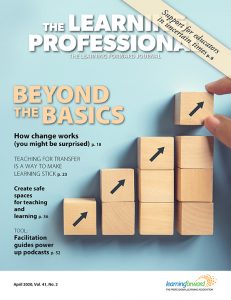