To advance the professional learning of aspiring and current school learders

Unit 1: Shaping a vision of academic success for all students

Purpose: Unit 1 provides participants with an opportunity to identify principal behaviors focused on setting, communicating, and shaping a vision. It also guides them in applying solutions to ensure success. Follow these links to move through the sections of this unit. Approximate Time: 4.5 – 5.5 hours.

Facilitators: Adult learning professionals may use this web-based learning tool in principal preparation courses or in workplace study sessions. Facilitators may encourage participants to take advantage of the writable PDFs to record and save their responses. For onsite study groups or classes, the facilitator may choose to print relevant worksheets and provide them to participants. Depending on class structure and learning goals, facilitators will use these tools to provide group and individual learning experiences within the following structure:

Consider ideas and connect with others

Think about the role of a school principal in shaping a school vision. Independently, respond to questions on the worksheet and exchange responses with a partner. Connect with others, if applicable, to discuss common themes.

View a clip on sharing a vision of academic excellence to see research in practice. Use the Big ideas chart to guide independent note-taking while viewing.

In this clip, viewers meet principals Tresa Dunbar (Nash Elementary) and Kerry Purcell (Harvard Park Elementary) and learn about their schools. Ninety-eight percent of students at Nash and 87% of students at Harvard Park come from low-income families. Both principals articulate their vision for their schools and explain why they became principals. Tresa focuses on the challenges related to working with new teachers, and Kerry highlights the progress she and her staff have made in the improvement of student learning. [Time: 2 minutes, 47 seconds]

The School Principal as Leader: Guiding Schools to Better Teaching and Learning (The Wallace Foundation, 2013), 7–8.

Although they say it in different ways, researchers who have examined education leadership agree that effective principals are responsible for establishing a schoolwide vision of commitment to high standards and the success of all students.

Newcomers to the education discussion might find this puzzling: Hasn’t concern with the academic achievement of every student always topped principals’ agendas? The short answer is, no. For years public school principals were seen as school managers1, and as recently as two decades ago, high standards were thought to be the province of the college bound. “Success” could be defined as entry-level manufacturing work for students who had followed a “general track,” and low-skilled employment for dropouts. Only in the last few decades has the emphasis shifted to academic expectations for all.

This change comes in part as a response to twin realizations: Career success in a global economy depends on a strong education; for all segments of U.S. society to be able to compete fairly, the yawning gap in academic achievement between disadvantaged and advantaged students needs to narrow. In a school, closing the gap begins with spelling out “high standards and rigorous learning goals,” Vanderbilt University researchers assert with underlined emphasis. Specifically, they say, “The research literature over the last quarter century has consistently supported the notion that having high expectations for all, including clear and public standards, is one key to closing the achievement gap between advantaged and less advantaged students and for raising the overall achievement of all students.”2

An effective principal also makes sure that the notion of academic success for all gets picked up by the faculty and underpins what researchers at the University of Washington describe as a schoolwide learning improvement agenda that focuses on goals for student progress.3 One middle school teacher described what adopting the vision meant for her. “My expectations have increased every year,” she told the researchers. “I’ve learned that as long as you support them, there is really nothing [the students] can’t do.”4 So, developing a shared vision around standards, and success for all students is an essential elements of school leadership. As the Cheshire cat pointed out to Alice, if you don’t know where you’re going, any road will lead you there.

Working in small groups or at their own pace, learners observe, discuss, engage, and reflect on the ideas and information presented in the film clips and related materials. Follow these links to tools that include writable PDF files to support this work. 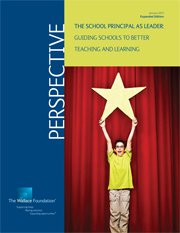 Clips from the Film

Offered in
collaboration with: