Menu
Press Releases // New Officers and Board Members at NSDC

New Officers and Board Members at NSDC

Mason was elected to the NSDC Board of Trustees in 2004 and served as a trustee for three years before becoming president elect. Mason is serving his final year as superintendent of Mountain Brook Schools in suburban Birmingham having recently announced his retirement effective at the end of the 2009 school year. During his tenure, Mountain Brook Schools was recognized with a U.S. Department of Education National Award for Model Professional Development and was the first recipient of the Alabama Quality Award for the education sector given by the Alabama Productivity Center at the University of Alabama. In his 35 years in public education, Mason has also served as a deputy superintendent, director of staff development, high school principal, assistant principal, and high school English teacher.

Mason was Alabama Superintendent of the Year in 2004, is a past president of the Alabama Association of School Administrators and a founding executive committee member of the Alabama Best Practices Center, a clearinghouse and provider of successful professional development practices.

Ingrid Carney of Chicago, Illinois has been chosen president-elect of the National Staff Development Council. Carney, appointed in 2007 to fill an unexpired term on the Board, is CEO of Carney for Kids Educational Consulting. With 38 years experience in urban school reform, Carney’s career includes serving as deputy superintendent for Boston Public Schools, senior executive director of Chicago Leadership Academies for School Success (CLASS), founding executive director of LAUNCH, the aspiring principals academy for Chicago Public Schools, as well as assistant superintendent, principal, teacher, and administrator for Chicago Public Schools. Carney is a Broad Fellow of the 2007 Broad Superintendents Academy and former president of the Illinois Staff Development Council.

Diaz is superintendent and director of Cedars International Academy in Austin, Texas. In 2007, he served as chair of the NSDC Annual Conference in Dallas. Elliott works in the West Vancouver School District in British Columbia, Canada, as a coordinator of district mentorship and induction, learning assistance teacher, counselor, and co-chair of the district professional development committee. 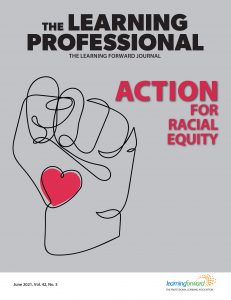