As NSDC’s director of learning, François is responsible for overall operation of the organization’s highly regarded Annual Conference and its recently developed Summer Conference for Teacher Leaders and the Administrators Who Support Them. In addition, she will guide the other major NSDC learning opportunities.

François brings a wealth of experience into this position. Most recently as the founder of François Consulting Services, she provided leadership development for organizations and individuals. She has also served in a variety of roles including posts as chief of staff for the Dallas Independent School District; associate commissioner of education at the Texas Education Agency District; assistant superintendent for human resources for Wake County Public Schools in Raleigh, North Carolina; department director at Region 10 Education Service Center; grade-level principal; and dean of instruction with the Dallas Independent School District.

“Joining NSDC as the director of learning is a natural outgrowth of my public and private sector professional development experiences,” said François, “and I am enthusiastic about the opportunity to work in an outstanding organization that is well known for its expertise in this arena.” 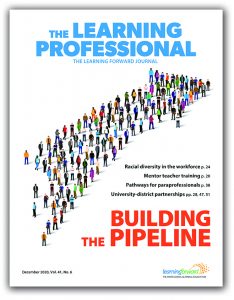